It would not be inaccurate to state that the mighty Black Fish harbour many a nemesis in MARSland; and time and again the fat clowns from Spectrum stake their claim as first amongst equals. The fact that the Fish have so shameless a record against these jokes weighs heavily on the minds of the great men who wear the Black with such pride.

And so it was that a nearly full-strength Fish team took to Court 2 with steely resolve, despite trailing Spectrum 230-231 in the chromosome count before the first jump. Unfortunately, steely resolve was insufficient to prevent the Spectrums from using their peculiar netball skills to leap out to a 9-zip lead.

It was at this point that the match-breaker, Foreman (D), entered the fray and blew the match apart, (literally) like a bowling ball through an array of garden-gnomes. Foreman's dominance, supported by an impressive cameo from Weeks (R), solid performances from the Rodgers boys, and a signature BF impregnable zone defence allowed the Fish to enter the second half in a strong position.

Many of the Spectra, despite advanced age, unfulfilled dreams, physical decrepitude, ill-advised facial hair, worrisome visceral adiposity and a variety of other undesirable characteristics, actually carry themselves with a certain wry humour and inexplicable good grace. But not all of them. It is perhaps of secondary importance whether tools are born or created; it is enough that they merely exist. And within Spectrum, exist they do.

One in particular, who shall go un-named (but who is pictured below, shortly before the match), distinguished himself above all others. A touch of on-court niggling - perhaps the very raison d'etre of men's E-grade basketball competitions - was enough to provoke one of the worst examples of nancy-arsed bitch-kicking ever visited upon an innocent opponent in the history of this fine competition. His actions, while fundamentally risible, would have been ACL-endangering had there been anything other than a rudimentary connection between his cerebral 'cortex' and his stubby excuse for a leg, and thus were rightly condemned by all present, including the massive BF support crew of Foreman (L), Edwards (K) and Rajapaksa (S). Content with his fine display of masculinity, "Sally" Spectrum eased his peculiar nicotine-patched rotund frame to the bench, never to return to the fray. 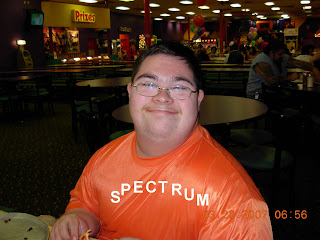 Your correspondent apologises for the self-indulgent rant that has displaced this week's match report, but has thoroughly enjoyed it.

Oh, and as for the remainder of the game?

The Black Fish dominated, of course. A magnificent 37-23 victory the reward for their travails, continuing an unbeaten run that dates back to the nail-biting tie with Metal Slug in Round 8. Next week's return clash with the slug promises to be one of the games of the season. Don't miss it.
Posted by BF00 at 8:41 PM No comments:

According to tradition, the more industrious members of the team spent their week off creating new Black Fish (or cheerleaders).

Another spectacular game may be summarised thus:

1. Deja Vu by any other name would still be a cob of munts (to coin an awkward spoonerism)