Round 4: BF v The Disgraced


Entering a crucial Round 4 encounter with novel/traditional rivals "The Disgraced" with a win-bye-tie record, the mighty Black Fish were desperate to maintain their unbeaten record for the season.

A cautious Fish team eased out to a gentle start, allowing the scorer to obtain some quality video footage without being otherwise troubled, while also familiarising themselves with their opponents. Only one Disgrace was familiar to the Fish, former Lobetrotter 'Carrot' who fell victim to the Black Fish way back in Round 5, Winter 2006, in a performance characterised by flashy incompetence, unreasonable outbursts, a hefty girth, and a stunning second-half fade-out. In a moment of cosmic symmetry pleasing to all (except the vegetable himself), his performance for the Disgraced was eerily similar.

The capacity crowd is likely to remember little of this peculiar match but the umpiring. Zebra-striped, festering-skin-lesion-afflicted obstructive-sleep-apnoea-boy and his inconsequential side-kick embarrassed themselves with an insipid display of tiggy-touchwood officiating that was sufficiently irritating to require your correspondent to resort to use of the phrase 'tiggy-touchwood' for the very first (and second) time. Most annoying. Even the Dalai Lamaesque, peace-loving BF00 found himself with four fouls at the half-time adjournment.

Having built a one-point half-time lead, the Black Fish again demonstrated their class by systematically deconstructing their opposition in the second half.

Rodgers (N) was a dominant force, jumping to a clear lead in the race for the season's top scorer. He continued to develop his telepathic relationship with his tall-timber partner in crime, Noutz, who not only commanded the boards, but also demonstrated some slick inside passing, adding another string to his rapidly expanding bow. Edwards was a constant offensive threat before a limp and premature exit at the hands of the officials. Nissen and Whittle completed the quality quintet with solid four-quarter performances interspersed with the usual flashes of brilliance.

By the end, it was a procession. A faultless second half saw the Fish win 29-13.

One can feel the excitement building within the Black Fish community in response to a best-ever start to a MARS season by the Fish. Don't miss this week's massive "Battle o' the Seven Seas" grudge match between The Mighty Black Fish and league minnows, King George Whiting.

In the immortal words of Wesley Snipes.....always bet on black.

P.S. Many BF fans have commented on the team's propensity to slow starts and torrential second-half scorefests. A quick statistical analysis of this season's games does not support this impression. While the Fish have scored a mean of 6.3 more points in second halves compared with first halves, this difference is not statistically significant (Wilcoxon p=0.29). The 95% confidence interval for the 2nd half vs 1st half differential is currently -11.1 to 23.8 points. Undoubtedly the statistically-minded amongst you will watch with interest as an increase in the sample over the course of the season narrows this confidence interval.
Posted by BF00 at 5:05 PM 3 comments:

Despite missing the finals, the Winter 2006 season stats contain some encouraging signs for this young band of brothers:

Comments and insights are welcome.
Posted by BF00 at 4:58 PM No comments:

Several new features will appear this season in order to enhance your enjoyment of the Black Fish experience.

The first such feature, an up-to-the-minute stats sheet featuring every player on the current BF player list has now gone live and may be accessed here or via the links.

Look out for further exciting features in coming weeks.

And don't forget to check out the complete 2006/7 fixtures list.

Entering Round 3 with a flawless undefeated record, the Black Fish looked full of confidence as they strode onto a typically dimly-lit Court 2 for the vital clash with traditional rivals Homobrand. The humbling experience of Round 19, Winter Season 2006, was but a distant memory as the Fish welcomed back club stalwarts Nissen and Downing for their first game of the season, relegating an unlucky Ang to an early Ben Hart-style retirement.

Despite the eerily-loud cheers from the massive courtside contingent of one (Ly), and the uncommon luxury of a substitute, the Fish eased themselves out to a slow and imprecise start. The usual laser-guided precision passing was strangely absent, allowing the lumbering Homobrands to steal an early lead. The fearful gasps from the cheersquad at the prospect of another humiliation at the hands of Homobrand would have been deafening had the crowd been several thousand times larger.

The fine men of the Black Fish, however, are so in tune with their supporters' emotions that even the relatively inaudible groans of disappointment cut deeply into their large (and for some, transiently segmentally-dyskinetic) hearts. Was there any doubt that the lads would respond? No, sir. And so, with a novel combination of dash, pluck, ill-conceived passes, strong rebounding, awkward fouls and a sprinkle of that old Black Fish magic, our boys closed to within a point at the half.

Few who had witnessed the first half would have expected the second half to be pretty. And it wasn't.

But it was tense, sweaty, hard fought, and - in the end - one of the most exciting matches of he season. On several occasions during the half it appeared that the Fish may have been swept aside, and indeed a lesser side may have capitulated, but they kept hanging on, confident in their freakish ball-handling skills.

As expected, all six Fish played well: Nissen channeled the emotion of a tumultuous day into a fearsome defensive intensity, Noutz controlled the defensive boards and entertained the crowd with a trick shot off the backboard supports, Whittle ran up and down doing the same old thing he usually does, Rodgers played a typically strong game in the key at both ends of the court, scoring in excess of half of the team's final score, relative newcomer Downing patrolled the mid-court to an extent rarely seen at this level, and it was again Edwards who led from the front with a strong display of piercing drives and sweet outside shooting.

In the frenetic final few minutes of the match both sides missed golden opportunities to score the winning points, but in the dying seconds a dubious foul allowed the Homobrands a chance to break the deadlock with a pair of free-throws ater the full-time siren. Unable to muster a Hoosiers-style fairytale shot, the Homobrand in question Motlopped both shots. The final result? A heart-stopping 21-21 draw.

While a disappointing result for the Fish, they remain undefeated this season and look forward with growing confidence to the Round 4 clash with traditional rivals (and league newcomers) The Disgraced. 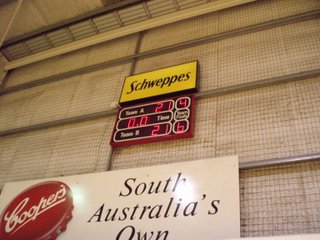 The Black Fish engaged in a marathon 12 hour training session in lieu of the Round 2 match.*

Summer season 2006/7 kicked off in grand style with the much-anticipated grudge match between mortal enemies The Black Fish and Air 'Supreme'.

Most basketball aficionados already recognise that Air Supreme are a pack of indescribable wankers, but if there were any doubters out there, this game served to prove the point entirely. Still suffering at the hands of injury, the Black Fish recruited Western Australian surprise packet Eugene Ang for his first game in the hallowed black strip. The Black Fish found it difficult to develop their rhythm early in the game and to the surprise of the large courtside contingent the Supremes shot out to an early lead.

The bizarre pack of simian halflings that comprised the hilariously large support group for Air Supreme again demonstrated their true class and sportsmanship by cheering loudly for any Black Fish mistake (rare as they might be). Thanks largely to their sad efforts the Fish redoubled their efforts and recovered the lead as the first half drew to a close; simultaneously, tensions began to rise in the steamy atmosphere of court three, culminating in one of the more gutless efforts ever seen at MARS Stadium. Michael Chang, in his brief on-court appearance, took out all the years of frustration at having diminutive genitalia on an unsuspecting BF00, slugging him in the proboscis with a back fist behind play. The half-witted referee then performed the archetype of panicky umpiring in calling a technical foul on BF00 for no apparent reason at all. Little man Chang then took himself and his little beard to the bench where he hid for the remainder of the game.

As you all know by now, this is when the Black Fish are at their very best. The second half was simply a rout as an organised and methodical Black Fish outfit destroyed their hapless rivals. From early in the first half it was clear to all those present that the Fish were going to romp away with a large victory. It was at this stage that the Black Fish players were able to entertain themselves by torturing the fragile psyches of their little opponents. Several psychotic episodes ensued despite a surprising lack of toe-treading and other behaviours recognised throughout the league as invariably inducing crazed behaviour in anyone wearing an Air Supreme uniform.

In the end it was an easy 41-27 victory to the mighty mighty Black Fish. All five Fish were outstanding, including first-gamer Ang who proved that Western Australians have skills other than running from RBTs. The Air Supreme support group, strangely quiet in the second half as their little men were humiliated, trudged off into the cool Marden night, back to their pathetic little lives.

For the Black Fish it was a magnificent start to their summer season campaign and the first step on the path to finals glory.
Posted by BF00 at 5:15 PM No comments:

Welcome all to the new season. The Black Fish are back and they're hungry for glory after narrowly missing the finals last season. Log on this season for even more incisive match reports, multimedia highlights, injury reports, and a few new features.....
Posted by BF00 at 4:44 PM No comments:

With no mathematical chance of playing in the finals the Black Fish entered the final minor round game against league heavyweights, The Fakers, with only pride at stake. And that is when the Fish are at their best.

Words are insufficient to describe the skill and courage displayed by this magnificent team in every breathtaking moment of this clash. And so there will be no description of the match.

Also, it was about six weeks ago so I've forgotten most of what happened.

But those who were there witnessed a display of steely defensive intensity, creative offensive opportunism, and uncommon passing precision that left the eventual league premiers utterly destroyed.

Admittedly, an even better end would have been to have qualified for the finals, but that is perhaps to miss the point - the point, my friends, is that the Black Fish are back, and they're here to stay. And with just the right degree of haughty pride, the fine men of the Black Fish chose not to contest the repercharge finals, leaving the small-penis brigade and future 'fifteen' chefs to scrabble amongst themselves for the minor honours.

For the Fish are already looking ahead to the summer season, in what promises to be a breakthrough period for this club. Dear supporters, look forward to a season of great victories, awe-inspiring highlights, and the return of some club stalwarts - all to be recorded on the ever-expanding website.

And so concludes Winter Season 2006. If we have learned but one thing this season, it is that vir non camelus est. 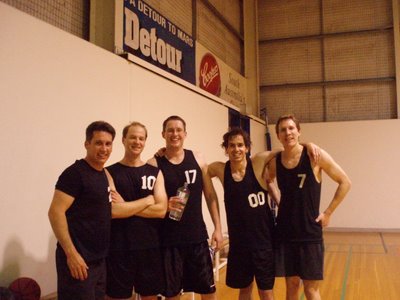