Black Fish at the 2012 TDU: a pictorial essay 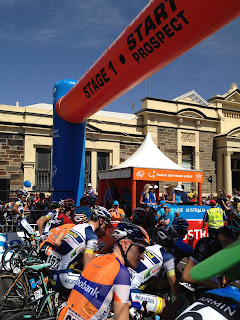 "Pro-Cycling Addiction Disorder" has many diagnostic criteria in the DSM-V, allowing psychiatrists considerable flexibility in making the diagnosis (according to prevailing beach-house-repayment conditions. Incidentally, it is little-known outside of the psychiatry inner sanctum that the entire DSM is a construct aimed at promoting beach-house ownership among psychiatrists. This may explain why Dicky keeps offering to treat my "Reverse Koro", but I digress).


The sine qua non of PCAD, however, is a compulsion to muscle one's way to a prime position at the start line of every stage of a pro-tour race and take a photograph to prove it.

Psychiatric diagnoses aside, it is my abiding hope that these photographs serve as a fitting memorial to my love of the sport when I succumb to the aggressive skin cancers that simultaneously formed during the long hours I spent securing my position at the start line of every stage.

The 2012 Tour Down Under faced a number of challenges: no Lance, no Cadel, no Contador, no Schlecks. No Mike "Go Panthers" Rann. Rolling hills dotted with clenbuterol-intoxicated cows. Adverse publicity from tragic Fat Cat-impersonator and owner of the worst pun in the Australian Business Register, Ralf "Life is a Cabernet" Hadzic.

But against the odds, this year proved to be perhaps the greatest TDU ever. Not only were the Black Fish at their fittest ever, resplendent in their new race kit, but the race itself was in the balance until the final few laps of Stage 6, and Australia's second-favourite cycling team, the Black Fish feeder squad GreenEDGE, were able to win the GC and set themselves up for an incredibly exciting year on the Pro Tour.

Above all, the weight of expectation fell most heavily upon the broad shoulders of the mighty Black Fish. Who could forget their heroic exploits in the 2010 TDU where, on the sector from Milang to Finniss that became no longer a bike ride but instead an apocalyptic scene that was equal parts La Divina Comedia and one of Cormac McCarthy's nightmares, the Fish prevailed where most failed, powered only by a Snickers bar and an enormous (and fortunately metaphorical) team set of cojones.

Or indeed the 2011 TDU, where the Fish were so confident that they voluntarily gave the peloton a 30-minute head start, and then caught up with such rapidity that they were soon involved in rear-end collisions with cars.

So it was little surprise that so many members of the professional peloton slipped away from their team managers in order to speak with BF00 about the possibility of riding in the black, white and red in 2013.

Sprinting legend Alessandro Petacchi was the first to make an approach. Although disoriented by the bling-induced blindness, I still had the presence of mind to mutter "Troppo grasso. Troppo lento. Troppa rosa". Sorry, Sandy.


Widely regarded as the funniest man in the peloton, German sprinter Andre Greipel was quick to offer his services to the Fish - indeed he grabbed a contract out of my hand and began signing it without even bothering to say hello. I was forced to whip it out of his hands, however. Despite a magnificent TDU, with several stage wins, Greipel is simply not Black Fish material.

First, we already have a hulking giant with rippling thigh muscles (see comparison below).

And finally, his bizarre obsession with the movie "The Piano", which has led him to tattoo "Anna Paquin" on his left forearm. I will spare our readers the graphic detail of where he has tattooed "Harvey Keitel" (or the revelation that it awkwardly contracts to "Heil" in cold weather).

And so the procession of pro riders continued, each hoping against hope to be able to leave their sorry little European teams for the majesty of Thursday night Dicky Spin, Sunday morning Lofty, and random Tuesday night cobblestone-pilfering. And each one, rejected, hobbling sadly back to their 'carbon' bikes. No BF00 aluminium super-heavy beast for you, my friends.


So it was that the Black Fish retained their elite roster of five for the big day, supplemented by two outstanding domestiques from Queensland-based Team Vertullo.


The stage was nominally 138km, but thanks to Weeks' 'shortcut' from the House o' Pain to the start line, the total distance covered for the day blew out to over 160km. Still, a mere trifle for athletes of this calibre.

Brushing past the likes of Eddie Merckx and Ironman Abbott, the Fish took their place at the start line, stopping only briefly for Dwyer to continue her pre-race tradition of riding over a bed of nails.


The entire 8000-strong peloton looked resplendent in their red jerseys, although the organisers repeated their bizarre decision from 2010 in which they changed the sizes from 'race-fit' to 'New Romantic-fit'. For fans of puffy sleeves, this was a great moment. For the rest of us, it was a matter of attempting to endure the parachute qualities of this absurd garment.

Incredibly, the ride itself was almost completely incident-free. Either that, or the noise from Chris' rear wheel hub was so loud that it blocked out all other memories from the day.


Perhaps the most disturbing incident during the day was our official warning from the race commissaires regarding our failure to comply with the strict rules for team names.

Apparently it is an official requirement that all team names in the community challenge must contain at least one awkward cycling-related pun. 'Black Fish Cycling' - a name revered in cycling circles worldwide - simply didn't make the grade, despite the organisers' attempt to add some humour by printing the name as 'Black FishCycling'. Still not funny.

Indeed the array of jokey team names was most unsettling. Worst, perhaps, was 'New RAH', which (as most will know) has always been a joke.

The closest any pun came to raising a
chuckle was 'Team Milfram'. Super-domestique Weeks was in fact seen to audibly laugh - not surprising given that the pun includes his two favourite things: the pale blue milky goodness of Milram, and MILFs (although not to the extent that his brother-in-law appreciates a good GILF. Isn't that right, Helen Edwards?).

The award for 'least ironic team pun name' was given to the girls from 'Team Wolf' who managed to combine the aesthetics of a bearded Jason Bateman with the speed of Michael J Fox.

Anyway, it took only some trademark Black Fish charm and a few autographs to assuage the commissaires, and we were on our way again, dignity intact.


From there, only one tragedy was to befall the Black Fish. In a desperate, but ultimately misguided, attempt to preserve his glycogen stores, team stalwart Alex Rodgers began a force-feeding programme that even the French would disallow at a goose farm. By the end of the stage Alex had managed to avoid bonking, but had undergone an extraordinary Kevin Federlinesque transformation from svelte athlete to lumbering reality-show contestant. We wish him well on his journey with Ajay Rochester and the rest of the gang over the next few months, and in his class-action suit against the manufacturers of Cadel's Mountain Mix.


The ride itself was, of course, no problem at all for the Fish. On the flat, the BF train was at its finest ever, and the hills presented no obstacle.


Even the fabled Mengler's Hill, a category 2 climb that proved to be the downfall for Andre Greipel's GC aspirations later in the day, was but a minor hurdle for a rampant Fish squad who, having emptied their bidons and consumed enough gels to cause dangerous hyperglycaemia and caffeine levels that would make even Alex Watson fibrillate, reached the summit with barely a gastrocnemius fibre out of place.


Soon enough, the mighty Black Fish crossed the finish line, having created a lead-out train that would have brought a tear to Mark Renshaw's eye.

And so it was over for another year. All that was left was to re-hydrate and watch disappointed non-Fish Oscar Freire lead a pathetically-exhausted professional peloton to the line, narrowly avoiding one of Tanunda's finest exponents of the art of driving the wrong way up a closed road. Sorry Oscar, an impressive effort, but still not enough for the Black Fish.


Little did the mighty Fish know, however, that Mengler's was a mere pimple compared to the hors categorie Col du Novotel which awaited them immediately before their first restorative beverage.

Little has been written about this terrifying mountain. And while my recollections are dimmed by the cerebral hypoxia that it induced, it would be no exaggeration to say that at some points the gradient was in excess of 85%. On and on it went, steep climbs interspersed with false flats, and blind corners leading to more vertical ascents. Possibly the perfect location for a hill-top stage finish that would put Alpe d'Huez to shame. A veritable Sufferfest transformed from mere pixels to the horrifying reality of baking sun and hard, unyielding bitumen.

But can a little HC climb after 160km of hard riding prevent the Fish from reaching their stated goal? Certainly not: