Black Fish are back! 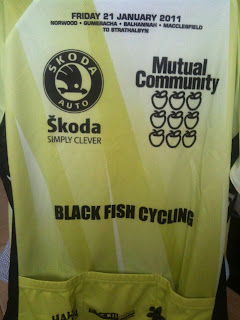 There is a palpable sense of excitement surging through the internet, as the mighty Black Fish sporting club returns to cyberspace. Since the unfortunate demise of the on-court arm of the Black Fish Basketball Club, the members of this proud organization have battled the forces of geographic dispersion and next-generation-of-black-fish-creation in order to diversify the sports that will be dominated by Black Fish in the future.
From triathlon to tennis, the Fish have athletes dominating every sport (primarily sports beginning with a 't'). But the big news this week is that for the first time, the elite cycling division of the Black Fish will compete under the banner of Black Fish Cycling, in the Tour Down Under community challenge. Black Fish stalwarts Whittle, Rodgers, Edwards and Weeks will be joined by co-opted Fish Finola Dwyer as they tackle 135km of pain, including the potentially heart-breaking Checker Hill.
But, as everyone knows, the Fish have hearts forged from steel. And no hill has ever been a match for the mighty BF cycling division.
We stand at the dawn of a new epoch. The era of Black Fish Cycling. Stay tuned for updates.
(P.S. note that we appear to be on a 5-year cycle)
Posted by BF00 at 1:47 PM