With only days remaining until Amy's Ride, the first major event of the summer season for Black Fish Cycling, the squad produced a magnificent training ride early on Sunday, October 23. While Rodgers used 'work' as a thinly-veiled excuse to continue his bizarre obsessional relationship with Mt Lofty (or as he now insists on calling it 'The Good Lady Lofty, my common-law bride'), Edwards, Weeks & Whittle set out in the early-morning quiet under appropriately foreboding skies. Veteran domestique Weeks, the team's master tactician and leader of the mighty Black Fish train on flat sprints, freshly-shaved and clearly lighter than at this time last year, looked in magnificent condition as he sought to tackle the fearsome Fox Creek Road hill climb for the first time.
The squad made excellent time along Gorge Road and soon made the first rest station, at Cudlee Creek Tavern. Unfortunately, this opportunity to carefully wipe the mud flecks from the irresistibly smooth thighs and adjust the brightly-coloured lycra (featuring light-blue cow spots in Richard's case), while refreshing themselves with delicious water and healthy Uncle Toby's products was soured by the audience for this spectacle of hyper-manliness, pictured below: 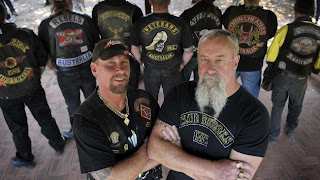 Having escaped with their lives intact, the squad rapidly departed in the direction of Fox Creek Road, the heady aroma of Farmer's Union Iced Coffee, never-washed leather, goatee-grooming products and THC fresh in their nostrils.
From there, it was all about pain.
Having last ascended Fox Creek Road in the 2010 TDU, Whittle and Edwards were filled with a bravado born of hypoxia-induced cognitive dysfunction. Unsurprisingly, it was hard. But mercifully short. And soon the squad was again piercing the humid hills air with the exocet precision of the fabled Black Fish train, ascending the traditionally-awful back side of Forest Range with relative ease.
After 3 hours of almost constant climbing, the Fish attacked the Greenhill Road descent. Sadly for fans of super-gonadal descender Whittle, his Hushovd-style attack was stymied by some beardy clown driving a diesel-spewing Land Rover who couldn't comprehend that it is reasonable to make way for a cyclist who is clearly faster than one's pathetic 'motor vehicle'.
In the end it was an extremely strong display by a team that is poised for greatness this summer. Stay tuned, Fish fans!
Posted by BF00 at 2:56 PM