It was deep into Winter season 2006 and the Fish had their backs to the wall. Sitting uncomfortably outside the top four, ravaged by soft-tissue injury, and facing the prospect of a first-ever clash with traditional rivals Homebrand, a side holding down a solid second spot and in possession of a towering percentage. Lesser teams may have folded.

But not the Black Fish.

Seven fine men strode onto hoodoo Court 3 in trying sub-zero conditions. One fine man (your Round 13 correspondent) kept on striding, taking his 'bag-o-chips' thorax all the way to the scorers' bench.

The Fish signalled their intent from the outset. Weeks, R, in his highly-anticipated return from McLeodesque injury, brought a noticeable zip to the backcourt and was a constant offensive threat with his trick-bag of novelty shots from downtown. 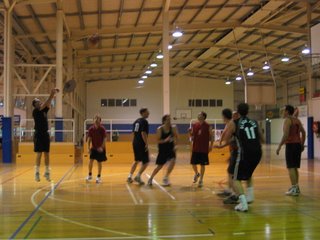 In perhaps the most complete display by the Fish in 2006, each man played his role to perfection. Weeks and Whittle controlled the perimeter, Rodgers dominated the boards at both ends, Vasilunas provided constant offensive potency (and is the clear leader in one-percenters), Noutz (looking resplendent) scared the living Bejesus out of any opponent in his trajectory, and Nissen overcame a debilitating thoracic injury to make a solid contribution without resorting to having a Nancy-boy first-aid kit on the bench.

In an almost flawless display, the Black Fish dominated the first half. The slick passes, hard-running, and commitment to team-mates provided constant joy and inspiration to the solid crowd of Ly and Edwards, S. By the long break the Fish had established a handy 8 point lead, but knew that their highly-fancied opposition would fight back in the second half. 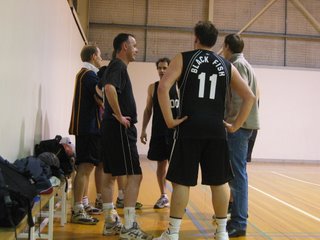 Much has been written about the Black Fish spirit. Intangible, but undoubtedly real, it exists at the core of this great club. Those of you fortunate enough to have met one or more of the players will need no explanation; one can feel it in the depths of one's humanity. Faced with a half-time option of taking a 10-point no-scorer penalty, and in the midst of the most pivotal game of the season, the Fish, as I know you all would have expected, turned down the offer and chose to face their destiny unaided. As true men.


When Homobrand closed the gap to 2 points within minutes of the start of the second half, one could be excused for pondering the wisdom of such a decision. But this is no ordinary team. In a game of a standard described as 'much better than E-grade' by the referees in a seemingly private half-time discussion, the Black Fish knew they had to lift. 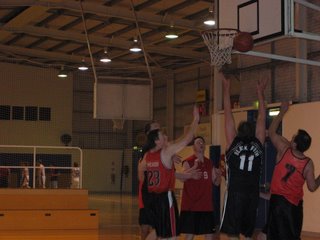 And lift they did. In a stunning burst of sustained skill and intensity, the Fish broke open the game late in the second half. Sharp passes, strong work at the post, dominance in the air, a paucity of unforced errors, flawless foul-shooting, spectacular fast-breaks (and one audacious sky-hook) left their opponents gasping.

With minutes remaining and a tenacious Homobrand using their trusted 'ineffective drive into the key' play at every opportunity, a lesser team may have opted for a time-out. But not the Black Fish. Even the plaintive cries of 'Tempo Basketball' from Neil Edwards on the sideline were ignored as the Fish pressed on towards victory.

In the end, the scoreboard declared a stunning upset victory for the Black Fish 36-33. The Fish now go into the mid-season break brimming with confidence and with a strong chance of breaking back into the top four.

A massive crowd is sure to be present for the late game against traditional rivals Spectrum in two weeks. 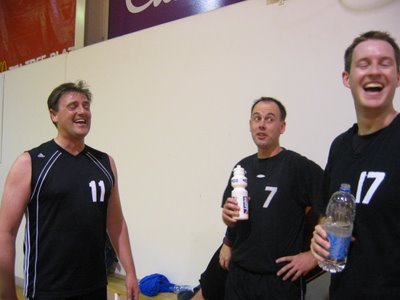