Round 3: BF v The Disgraced

The sad demise of the popular Aussie Bruddhas franchise forced an injury-riddled Black Fish side into a last minute finals re-match with traditional rivals and unrelenting wankers, The Disgraced.

Surprisingly, the super-fit man-specimen Carrot was sidelined with an undisclosed injury (heart muscle-related until proven otherwise), leaving a troupe of little Super Mario clones to face the might of five super-fish (00, 03, 06, 11 & 12).

From the first minute of the game, it was all Fish. The D-train sparked things off by niggling the referees and the opposition in a remarkable display of psychological warfare. Rodgers (A), continued his rich vein of form by repeatedly driving through traffic to the bucket. Downing produced perhaps his most impressive performance to date, exhibiting fierce defensive intensity and wearing a nasty gash on his face to boot (pictured). Whittle tried to match Magic Johnson's talent for assists while simultaneously avoiding his talent for acquiring unpleasant social diseases. And Noutz was at his barn-storming, opponent-stomping best as he absolutely dominated the boards.

The most complete team performance of this season resulted in the first win for the season, 44-32, and put the rest of the competition on notice that the mighty Black Fish are a force to be reckoned with in Winter Season 2007. 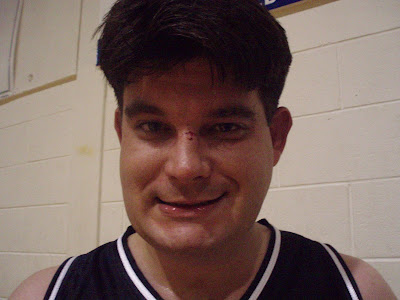