Rumours began to fly around the MARS community as the Mighty Black Fish took to the pine for their crucial Round 16 clash with traditional rivals Air 'Supreme'. There had been weeks of speculation regarding the playing future of out-of-contract superstar 'Walls' Downing as it became increasingly apparent that he was eyeing a return to active competition. Many insiders were aware that he was close to some members of the Fish playing group but few would have guessed that he was on the verge of signing with the injury-ravaged league pacesetters until he strode into MARS stadium and took his place alongside the Black Fish cheersquad. Unfortunately for his legion of devoted supporters he did not don the playing togs on this occasion, choosing to provide his distinctive brand of vocal support, but one must surely anticipate his imminent appearance in the Black Fish side. 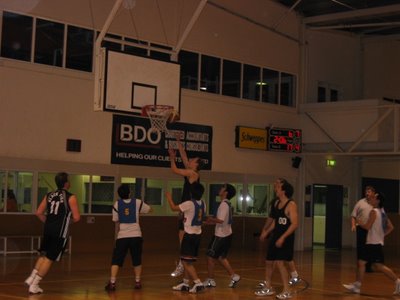 Buoyed, but not distracted, by the commotion courtside, this week's Five Fit Fish - Whittle, Edwards, Nissen, Noutz and Rodgers (N) - leapt out of the blocks against their jewellery-clad foes. Few could forget the spiteful nature of the previous clash between these two sides, but who could have predicted the fiery encounter which developed in the late-night cold of Court 1?

The result was never in doubt. Well-drilled, committed, sublimely skilled and devastatingly handsome, the Fish asserted their dominance on the scoreboard from the outset. The defensive effort in particular was a highlight, squeezing the life from the little 'Supremes'.

And then the game exploded into life.

Big Carl Noutz, in characteristic fashion, put his body on the line in a contest for a loose ball with 1989 French Open tennis champion Michael Chang, who surprised many by wearing his tennis outfit throughout the game. There was little surprise (but several chuckles) when Chang's semi-conscious body flew across the court, limbs comically flailing, as Noutz stood still as a statue. But there was plenty of surprise when Chang, no doubt filled with rage at his disappointing and under-achieving career after winning the French Open at the age of 17, leapt to his feet and began ranting maniacally about several improbable outcomes, including taking a swing at the amused Noutz, whose scone he would have required a step-ladder (and a boost from his buddies) in order to reach with one of his diminutive fists.

A technical foul and plenty of laughs followed, while Chang retreated to the bench, rummaging desperately in his bag for a racquet to smash. Many of those present thought that the violence was over. But 'Supreme's' resident DSM manual, 'Legs' 11, had other ideas...

Early in the second half, the quality niggling of Rodgers (N) finally broke his fragile psyche. Words really cannot capture what ensued over the next few minutes. Even a request from your correspondent for a brief first-hand description of events from those at the stadium elicited only one response, from the curiously absent 'Clark Kent' Edwards. It is probably fair to say that the entire history of the human race has never before seen such a response to having one's foot accidentally stepped upon.

One tends to recall brief snapshots of the event, filtered as it was through a strong sense of disbelief, and partially obscured by tears of laughter. It is rare that any of us has the opportunity to witness the complete and sudden decomposition of a man's psychological health - in many ways, we were privileged to be present, for this was an experience the likes of which one relates to one's grandchildren.

In the end, a good 10 minutes of game time was stolen from the Fish, but it was worth it. Much like living through a cyclone, players from both sides could do nothing but watch with a mixture of horror and fascination, and wait for it to be over before assessing the damage. After numerous technical fouls, an ejection from the game, several direct threats to the health and wellbeing of the referee, some comic waving of stick-thin limbs in a poor imitation of physical intimidation, and a retraction of the rejection by a tired referee who could feel the hot breath of Sudden Cardiac Death on the back of his neck, it was over.

And, professional to the last, the Black Fish continued to dominate their pathetic opposition until the final siren, recording a 38-18 rout of the 'Supremes'.

If only there were video of the meltdown suffered by 'Legs'. Alas, there is not. But there is a montage of some of the sweet plays by the Fish, which you will have the good fortune to view later this week.

As the Black Fish juggernaut continues, attention turns to the pivotal clash with league heavyweights, the Aussie Bruddhas, in Round 17.
Posted by BF00 at 3:37 PM