Round 18 saw a depleted Fish line-up tackle perennial nemeses The Fakers on Court 2. Brimming with confidence after stringing together five consecutive wins for the first time this season, the mighty Black Fish were confident of an upset victory as the testosterone-riddled quintet of Whittle, Edwards, Nissen, Noutz and Vasilunas strode ferociously onto the pine.

The match started at a hectic pace as the defensive intensity of both sides ensured that this would be an epic arm-wrestle. The Fish maintained a fierce focus but struggled to cope effectively with The Fakers' cunning numerical mismatch strategy, particularly at the offensive end. It is perhaps a testament to the character inherent in this club that the boys dug deep to avoid the humiliation of a first-ever scoreless half, eventually securing their solitary bucket with fewer than 90 seconds on the clock. 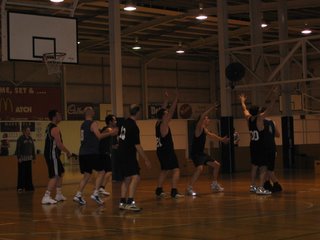 Half-time was an opportunity to regroup. One could sense that all five players (and the magnificently ubiquitous Hoang and Caroline) were thinking to themselves 'what would Neil Craig do?'. And sure enough, the second half was all about process. The boys began to take care of the little things, and the big things - inevitably - took care of themselves.

By the ten-minute mark of the second half, the game was on the line. The Fish were back. The Fakers were rattled. The fans were delirious. The referees were shithouse.

A panicky time-out by the Fakers saw them to revert to their peculiar 4-on-5 formation in an attempt to negate the irresistible scoring potential of the glorious Black Fish. Eventually, however, The Fakers' negative brand of tempo basketball may have driven away the fans, but saw them secure a tight 13-20 victory over the Fish.

Basketball pundits cannot fail to be impressed by the character shown by the Fish in the second half, out-scoring their more fancied opponents despite the blatant negating tactics. One may rest assured that a potential finals clash between these two sides would be welcomed by an ever-improving Black Fish side that might just fancy its chances in a re-match.

But for now, the business of qualifying for the finals is becoming very serious indeed. Five evenly-matched teams are battling it out for the top four in what promises to be an epic conclusion to the minor round. Don't miss it!
Posted by BF00 at 9:09 PM