There have been few games more important in the history of this magnificent club than the return stoush with traditional rivals (and BF bunnies) Homobrand.

The importance of the game is illustrated by the overdue return from the twos of starting centre Rodgers (N), and by the capacity crowd packing the creaking grandstands of Court 3, including newly-recruited scorer Rodgers (S) (pictured below), who is certain to be drafted by the Fish under the Father-Son rule in a few short years. 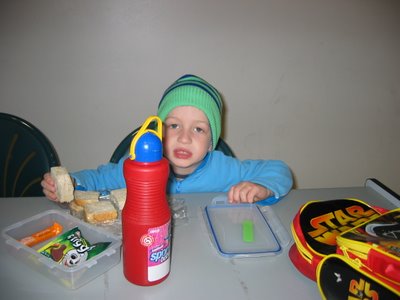 And Edwards, to the clear detriment of colons throughout our delightful southern suburbs, forsook his ailing clients to drive (no doubt erratically) at breakneck speed back to the safer streets north of the city in order to make it on court mid-way through the first half. Six Black Fish, for the first time in months.

And then, to top it all off, in strides the heroically injured favourite son Rodgers (A), in his first appearance courtside since the unforeseen Achilles-like season-ending injury of Round 9. Fortunately, unlike Achilles, Rodgers (A) has not spent his recovery time engaging in homo-erotic 'physiotherapy' with his attractive male cousin (as far as can be established).

Terrified by the prospect of another loss to the might of the Black Fish, Homobrand finally eased their trembling limbs onto the court at about the five minute mark of the first half. As expected, the first stanza was a closely-fought affair. Inspired by the rare conjunction of three Rodgerses and the loud cries of "Go Goldfish" from the scorers' bench, the Fish held their own valiantly against a quality Homobrand line-up.

The second half, unfortunately, was a disappointment for the legion of Fish fans. Although they fought strongly to the end, the Black Fish were unable to maintain the full-court intensity required to hurt the minor premiership contenders. An outstanding game by Vasilunas, who dominates this week's highlights reel, was not enough to prevent a 28-43 loss.

With only six weeks to go until the finals, each game is now crucial in the race to make the top four. Faced with a crunch match in Round 20 against Spectrum, the Fish will turn to their secret weapon - Downing (K) - in a stunning selection ploy. This game is not to be missed, as it is certain to be a modern classic.
Posted by BF00 at 9:43 PM