The full Black Fish elite cycling squad rode together in the new BF kit for the first time today when they tackled the "Ride Like Crazy" as a final hit-out before this week's Tour Down Under.


The etymology of this annual community ride is little known, but we can exclusively reveal today that the ride is so named because one would have to be crazy to pay $110 for two bananas.

Fortunately for Black Fish fans, the elite squad is currently rated as only 20% crazy.


Even better news is that the team has reached peak fitness and dominated the peloton throughout the day.

But the highlight of the day for all cycling fans was an almost mythical alignment of the cycling planets. As the fabled Black Fish train flew along Gorge Road at terrifying speed, the mighty greenEDGE squad shot past in the opposite direction (at noticeably slower pace). Despite the roar of the wind in our ears, one could still discern both the gasps of the crowds lining the road and the angry shouts of greenEDGE captain Stuart O'Grady demanding the return of the missing fragments of his Paris-Roubaix trophy.

You'll have to catch us first, Stuey. 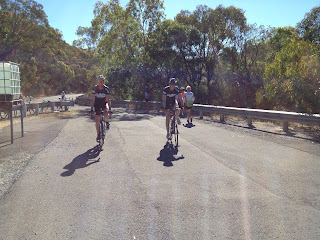 In all, the perfect preparation for a big week for Black Fish Cycling.